Each step in a mission requires one energy point. Once energy is exhausted, you have to wait for it to recharge. Energy fully recharges every time the commander gains a level. Energy Packs can also be purchased from the shop using 60 diamonds. Research can increase the total amount of energy available and the rate at which energy recharges. 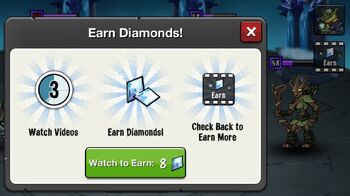 There are many different heroes in HonorBound, with different abilities, attacks, and upgrades. Heroes are classified in three important ways:

See the Heroes page for a chart of heroes by rarity, or browse by category:

Each hero possesses three special abilities that enhance the play and strategy of the hero. Each class of hero has a common base ability, such as 'Steal' for rogues, or 'Capture' for commanders; however, newer heroes and commanders don't always follow this format.

See the Abilities page for basic information about common abilities by class, or see Category:Abilities for a listing of all abilities.

Heroes have different resistances to the different forms of attack available in the game -- crushing, piercing, slashing, fire, ice, lightning, light, dark, toxic, and disease. An excellent strategy is to use an attack that your opponent is weak to. At the same time, it's important to protect your own heroes against attacks they may be weak to. Certain knights possess a warding ability to protect squad members against attacks of a certain elemental affinity. Conversely, certain clerics possess an invocation ability to enhance the attacks of squad members from a certain elemental affinity. Additionally, special "Resistance Dungeon" events take advantage of these strengths and weaknesses to pit one type against another. A player would be wise to have many attack types, resistances and affinities to choose from amongst their heroes.

Heroes can equip 4 pieces of gear: 2 rings, an amulet, and a trinket (or charm). Gear is acquired mainly through Treasure Chests during missions, but can also be purchased from the shop. Gear can be examined and sold from the inventory window. Amulets require hero Rank 2 to equip. Trinkets require hero Rank 5 to equip and become available after completing the mission What Naema Fears.
See the Gear page for more information.

The game's story narrative is told through various missions that are completed in sequence. Missions typically involve several areas or maps to battle through, with a final "boss" hero at the end and various "sub-boss" heroes throughout. Bosses and sub-bosses are stronger than normal heroes and possess special abilities over and above what are available to the player. These special heroes are denoted by a red glow at their feet when viewed on the map. Players are advised to approach boss battles with full health and more strategy than normal battles.

See the Missions page for a listing of all storyline missions and optional side-missions.

Player vs. Player ("PvP") battles allow you fight the squads of other players in the Arena, where the opposing team is controlled by the game's artificial intelligence ("AI"). The AI calculates who goes first based on the "initiative" of each party. Players are unable to calculate initiative, as that information hasn't been released by the developer, but players are able to influence initiative through the Luck score of each hero. Also, abilities such as Haste and Slow can increase or decreased initiative. Having the first attack is a significant advantage in the game generally, but even more so in PvP, as matches tend to be weighted more evenly than normal battles.

There is no way to "lose" the game, but it is possible to fail a mission. When your commander is killed during a mission, the mission fails unless you use a Revive Potion. If you don't have any Revive Potions available, there is an option to purchase one using diamonds. Otherwise, you must restart the mission.

In PvP combat, unlike the normal game, the battle will continue if your commander is killed, so long as other members of your squad are still alive. Revive Potions are now available in PvP -- new in version 2.42.64.

Research can upgrade and unlock many different elements of the game, such as the level rank of your heroes, the size of your coin vault, or the number of squad members. Research typically costs embers or coins and takes a set amount of time to complete. Having more scholars performing research means faster progress.

There are three different ritual ceremonies:

Community content is available under CC-BY-SA unless otherwise noted.
Advertisement